“Macrolide antibiotics (erythromycin, clarithromycin and azithromycin) are among the most widely prescribed antibiotics, with millions of prescriptions dispensed in Canada each year.” wrote Dr. David Juurlink, quoted Science Daily. Dr. Juurlink is a scientist at the Sunnybrook Research Institute and the Institute for Clinical Evaluative Sciences with study’s coauthors. “The drugs are generally well-tolerated, but they can cause several important drug interactions,” he added.

This study looked at residents of Ontario, Canada who were at least 66 years old and who were also treated with a calcium-channel blocker, medications typically used in the treatment of high blood pressure, said Science Daily, noting that the participants were reviewed from 1994 to 2009. The team reviewed information on those participants who required hospitalization for hypotension and if a macrolide antibiotic was prescribed for these participants shortly prior to the event, said Science Daily. 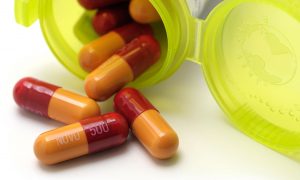 “In older patients receiving calcium channel blockers, the two macrolide antibiotics erythromycin and clarithromycin are associated with a major increase in the risk of hospitalization for hypotension,” the authors concluded, quoted Science Daily. “However, the related drug azithromycin appears safe. When clinically appropriate, it should be used preferentially in patients receiving a calcium channel blocker,” the authors added.

We often write about the challenges with drug interactions and recently wrote that the Chicago Associated Press (AP) reported that deaths linked to in-home medication mistakes, such as what was seen with actor Heath Ledger, have risen markedly in the past 20 years, based on a review of U.S. death certificates. Study authors blamed increased availability and “home use of prescription painkillers and other potent drugs,” saying many of these potent medications were typically administered in hospitals 25 years ago. “The amount of medical supervision is going down and the amount of responsibility put on the patient’s shoulders is going up,” said lead author David P. Phillips of the University of California, San Diego. The study looked at about 50 million U.S. death certificates.

Another example on which we previously wrote involved Prilosec and Nexium reducing the anti-clotting effects of Plavix, which can put patients at risk for heart attacks or strokes because patients taking Plavix to prevent blood clots will not receive the full effects if they are also taking Prilosec or Nexium.

A Brief Overview on Different Types of Urine Drug Tests

Employee drug testing is a widely used method to detect illegal drugs and alcohol in the workplace. However, there are different types of employee drug testing at work place. These tests can be conducted by employers for various reasons. One such reason could be that it helps them to keep their employees safe. There are […]

Neck Pain Relief Is Easier To Get Than You Might Think

When your neck hurts, you are going to feel it. Most likely, it will hurt in your back, shoulders, and head. The pain can be sharp and associated with movement only, or it can be a dull ache that just won’t go away. Often, neck pain is caused by tension in the neck and shoulders, […]